Status
Not open for further replies.

Minnesota Staff
Within the lands of Evodia, there will be some variance in positional power between the different nations. The following titles will form the most commonly encountered nobility, and the titles available for players to pursue.

Squire
Squires are selected by Knights to serve them and receive training in how to serve the nation. A Squire will be expected to serve their Knight loyally and without question; failure to do this will likely result in dismissal from the position.

Courtier
Courtiers are selected by Viscounts or Earls to serve and receive training in how to navigate the complex world of social politics. A Courtier will be expected to serve their Viscount or Earl in whatever capacity that is required; failure to do this will likely result in dismissal from the position. (This position replaces the previous position of “Cup Bearer”)

Knight
Knights are elevated from the ranks of squires by a Baron(ess)/Count(ess)/Earl. The Knight will be granted territory within the Barony/County/Earldom of their patron that they will be responsible for watching over and protecting. Additionally the Knight may be dispatched on errands for the Baron/Count/Earl which they will be expected to complete to the best of their ability. The dismissal of a Knight is considered a serious affair, and is only likely to come about from a severe breach of trust or protocol.

Viscount
Viscounts are elevated from the ranks of Courtiers by a Baron(ess)/Count(ess)/Earl. The Viscount will be granted territory within the Barony/County/Earldom of their patron that they will be responsible for managing and presiding over. A Viscount may be called upon to conscript peasants from their territory, provide resources to the government, or sit on a privy council to a greater Noble. The dismissal of a Viscount is considered a serious affair, and is only likely to come about from a severe breach of trust or protocol. (This position replaces the previous position of “Lord”)

Baron(ess)
Baron(ess)s are elevated from the ranks of Knights by the King/Queen. The Baron(ess) will be granted territory within the nation which they will be responsible for managing and defending. A Baron(ess) will typically find themselves granted a Barony in territory that is likely to be contested or need to be defended; as such most Baron(ess)s are selected for their military or combat prowess. During times of war and conflict Baron(ess)s are expected to provide resources and soldiers to the nation’s military in whatever area is most in need. Misconduct on the part of a Baron(ess) would serve as a blemish on the King/Queen for their failure in selecting the Baron(ess), as such the dismissal of a Baron(ess) is a serious event with almost as much pomp and pageantry as their elevation.

Count(ess)
Count(ess)s are elevated from the ranks of Viscounts by the King/Queen. The Count(ess) will be granted territory within the nation which they will be responsible for managing and defending. A Count(ess) will typically be granted a County in territory that is sheltered from conflict by external Baronies; as such most Count(ess)s are not expected to train soldiers, but instead to provide financial and economic stability for the nation. During peace times it is expected that Count(ess)s will provide for the needs of the nation in the form of resources and food, and in war times they will be the principal source of rations for the military. Misconduct on the part of a Count(ess) would serve as a blemish on the King/Queen for their failure in selecting the Count(ess), as such the dismissal of a Count(ess) is a serious event with almost as much pomp and pageantry as their elevation.

Earl (NPC Only)
Earls are the inheritors of lands and titles passed down from their parents. While the child of a Count or Baron may request their parent’s titles, the decision on whether or not to grant them rests with the crown. An Earl does not have to wait on Royal prerogative to be ensured that their claim to land will continue past the deaths of their parents. The title is only passed down to the firstborn of each Earl, unless circumstances demand that it be passed to a latter descendant (such as if the firstborn suffers a permanent death before their inheritance is realized, or if an Earl left no heir upon their death); the other descendants of an Earl will commonly find themselves serving as Viscounts or Knights to their parent, or married into another Noble family. The titles of an Earl still lie with the crown, and may be stripped for truly egregious acts, however such an act would earn the ire of the other Noble families and would be damaging to the cohesiveness of the Nobility. In terms of authority, an Earl has the same power and responsibility as the Barons and Counts.

Duke/Duchess (NPC Only)
The title of Duke/Duchess is an inherited title passed down from one generation to the next. As with Earls, the title is only passed to the firstborn, barring some extenuating circumstance. Dukes/Duchesses hold vast swaths of territory that includes many Baronies, Counties, and Earldoms. The Dukes/Duchesses of the nation make up a Princes Council that directly advise the King/Queen on matters of state, and manage the operations of the state on the King/Queen’s behalf. It is the responsibility of the Dukes/Duchesses to organize the Barons, Counts, and Earls under their authority to best serve the nation.

Authority and Power
The authority and power of each title is listed below in this table. If a title is on the same level as another title, it has the same amount of authority. Any title that outranks another title can give orders to that lesser rank and expect that it will be followed. 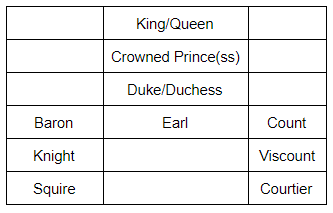 Other Titles
These titles are not directly related to the leadership of a nation, but still bear a great deal of responsibility and are subject to our leadership agreement.

Lord/Lady
These titles are not directly tied to the Nobility, and the address of “Lord/Lady” is appropriate for addressing any Noble whose rank you do not know. This title is also borne by those who have gathered great political sway or influence, as well as descendants of prior Nobility who did not inherit their parent’s title. (This title can be earned within one of our Subfactions)

High Lord/Lady
This title is given to those who have a great deal of political sway within the Nation. It is an added title if given to someone who is part of the Nobility (e.g. “High Lady Countess or High Lord Baron”). Such a title is given less formally than the Noble titles, but if used improperly will surely earn the ire of those who have truly earned such esteem. (This title can be earned within one of our Subfactions)

Subfaction Ranks
The ranks of Magician, Master Magician, Senior Merchant, Master Merchant, Captain, Major, Explorer, Pioneer, Slayer, and Master Hunter may each be earned within different Subfactions within our chapter. Each of these titles bears no formal power outside of their Guilds, but due to the influence they will have within their guilds, PCs that hold these titles are expected to abide by the Leadership Agreement.
Last edited: May 13, 2019

Status
Not open for further replies.