Of Templars and Religion

Owner
Moderator
HQ Staff
I agree. It is possible to go too far. A shield with a cross symbol could just be a design. Wearing an actual crucifix would be going too far. Preaching would be over the line. Not having seen this person or the way he acts, I can't judge it -- it's up to the local chapter to make that decision.

It's all a gray area, but we shouldn't be so sensitive that we remove anything that possibly might offend someone or cross the "no religion" rule by a small amount.
Read my novels, taking place in the world of Alliance LARP!
www.MichaelAVentrella.com

The tabard is a remake of the knight templar outfit (at least that's what I saw in the picture). That is a pretty clear religious reference. To me that's no different than dressing in a nuns habit. I agree most of the time people are oversensitive about the no religion rule but this one is in that grey area where if another player said something I would ask the person to change clothes. I am not saying he can't wear it or that his chapter owner will get in trouble for allowing it but they may catch flack.
IG: Ambassador Alcandar Northwind, in the service of King Gyr
OOG: Oregon & Seattle Rules Marshal
http://nwnerdcast.com Check out my podcast all about role-playing!
M

Focusing on the original topic, I agree with the OP (and have for some time) that the word "Templar" is a very poor choice of words due to the religious connotation. That said, I don't have a suggestion for a better word, which is the reason that I have never written a proposal to change it. It would be nice if we could find another cool sounding word that implies the concept ("Adept" was a brilliant idea), but honestly, nothing comes to mind. I don't like "Swordmage" because it has the word "sword" in it which implies too much.

On a related note, I'd love to see the word "Paladin" leave the IG lexicon of HQ, but again, I can't imagine an appropriate substitute.

Any ideas to replace the word "Templar"?

Rulebook p. 14 said:
One of the quickest ways to get your character history rejected is to draw too heavily on religion or religious themes.
Click to expand...

99% of the time, a character's background -- especially the specific, nitty-gritty type stuff -- is between the player and the plot team, and a lot of times is there to simply serve as a "focal point" for the player to give that character depth (an overly simplistic way of describing the process, I know). Things that are shared or told at events, more often than not, are simple versions that leave out most of the details.

So why then would having a background that draws too heavily on religion or religious themes be rejected? As long as the character isn't going around getting in people's faces about it, why would there be a problem? Why was that specifically included in an otherwise fairly sparse description of this nebulous policy? I'm asking because I'm genuinely curious, not because I'm trying to be difficult (which I realize this post may sound that way).


ASFDan said:
As far as things go it's just not that big a deal when it comes to the greater picture. The religion-free stance of Alliance is about trying to avoid accidental disrespect and/or discomfort for players of various OOG religions, not about abolishing everything of potentially religious symbolism from the game, everywhere, always. Can he worship/proselytize/convert/pray/etc? No, that is prohibited by the rules of the game. Should he be crucified (see what I did there?) for having a cross on his shield or what have you? Absent the aforementioned RP to hold it up as religious in significance I'd suggest it's pretty nitpicky (to be polite) to do so.
Click to expand...


Rulebook Page 14 said:
This is especially problematic, for many people consider much of folklore to be fair game, but unknowingly and ignorantly trod over religions that are actively practiced (in particular paganism) because they mirror fantasy gaming.
Click to expand...

I think it's more a matter of applying a rule (or policy) universally, and as fairly as possible, across all chapters in the game. Looking at it from an organizational standpoint, it sucks to be able to go to one chapter and have something accepted, then travel to another (should the opportunity arise) only to have it rejected which makes the rejecting chapter/staff member look like/feel like an ******* because they're just doing what their chapter owner wants them to do.

Also: a class name change wouldn't be out of line. How about a Cavalier, Barrister, or a Gallant?
These forums are a product of our time. They depict racial insensitivity that is common in our community. These depictions are wrong now, and will be wrong in the future. While they do not represent the ideals of Alliance, this content is being presented as it was originally created, because to do otherwise would be the same as claiming these prejudices never existed.

Oregon Staff
Marshal
Actually, his tunic is fine with me, my issue is with the use of what appears to be the Patriarchal Cross (or possibly the Byzantine variant of the Patriarchal Cross) on his shield. The Patriarchal Cross is a very distinct symbol, and has some very specific, very religious meanings (one of the reasons why it's been on the Hungarian coat of arms for like forever). For me, it's crossing the line. *shrug*

As for new names, I like Spellblade (I agree, too much sword for people who might be using other weapons, but it gets the idea across). I guess you could do Weapon Mage to try and be more inclusive, but that doesn't really roll off the tongue well.

Hm...this is tougher than it looks...Every time I come up with a great idea for a Celestial Templar, it doesn't work so well for an Earth Templar and vice versa...

Well we can all argue till we're blue in the face but in the end, as Mike pointed out, it's up to the individual chapter.

I know they aren't all good but just some ideas.
IG: Ambassador Alcandar Northwind, in the service of King Gyr
OOG: Oregon & Seattle Rules Marshal
http://nwnerdcast.com Check out my podcast all about role-playing!
M

evi1r0n said:
Well we can all argue till we're blue in the face but in the end, as Mike pointed out, it's up to the individual chapter.

I know they aren't all good but just some ideas.
Click to expand...

You totally stole half those names from Kingdoms of Amalur: Reckoning.

I am going to steal one, too.

I'm a little leery of X-Mage only because our caster class is called "Scholar", not "Mage", "Magic User", or "Wizard". If I were leaning in that direction, I'd go with Warsage or Battlesage instead (maintaining the "scholarly" concept).

evi1r0n said:
Well we can all argue till we're blue in the face but in the end, as Mike pointed out, it's up to the individual chapter.

I know they aren't all good but just some ideas.
Click to expand...

You totally stole half those names from Kingdoms of Amalur: Reckoning.

I am going to steal one, too.

Caught me.
Yeah, they had a good list so I threw some of them up there to get the ball rolling.
Side note: Decent game.
I really like Battle Magus but that's from Rifts.
IG: Ambassador Alcandar Northwind, in the service of King Gyr
OOG: Oregon & Seattle Rules Marshal
http://nwnerdcast.com Check out my podcast all about role-playing!

I would also favor:

This is ultimately a change that doesnt affect the rules and I would probably back it if proposed but chances are the name wouldnt change until the next edition of the book.

"You might know me from such PCs as Fern Woods and Jehan Wyldweaver."

I'm partial to Warsage, Battlemage, Battlescholar, or any variation thereof. There's some other good ones as well.

I could write the proposal up if someone would like that.
Brett
Garridan the Silent (Human Rogue)
Caliban of House Malache (Dark Elf Templar)

Marshal
Don't you know the Dewey Decimal system?
For all your faded glory needs.

I want to be an angry librarian.
Click to expand... 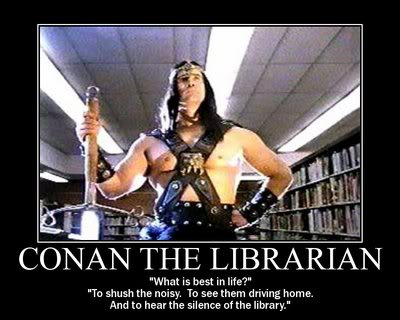