We've got a high ogre with a few of the mana potion bottles tied with leather into a necklace he wears.

It should also be noted that potion/elixir vials don't need to actually be capable of holding anything, so long as they take up the required space and look fairly "container-esque".
Am I An Atheist Or An Agnostic?-Bertrand Russell

jpariury said:
It should also be noted that potion/elixir vials don't need to actually be capable of holding anything, so long as they take up the required space and look fairly "container-esque".
Click to expand...

About a decade ago I used gluesicks (like for a hot glue gun), and would wrap some tape over the top to be a 'cap'. Worked fairly well, and you could cut them to whatever length you needed.
-Stephen, who does some stuff sometimes
D

I may have to buy a large amount of falcon tubes...
James the Inconceivable of Harbors Far, Soldier
or
Rellen Swift

So here's some pics of my potion Rod - it is 9" long, made from thin walled 1.5" wide PVC piping (I believe it was originally a drain pipe for a sink) and can hold 16 Burger King Straws (1/4 ounce capacity) snugly. I wrap the potion tag around the center of a Q-tip and place said item into the straw. The cotton helps to keep it in position however over time they will slowly move down the straw. That's why I leave both ends of the tube open so that I can simply blow in the bottom end of it and it will shoot up the sinking potions. Interesting note, if you blow hard enough, you can 'dart' a target with a dozen cure light wounds potions - not that it will do anything to help them - but it is funny watching the target's face when you do it

Oh, and the stylin' fabric is that it's my gypsy character that uses it but any cover can be used really. 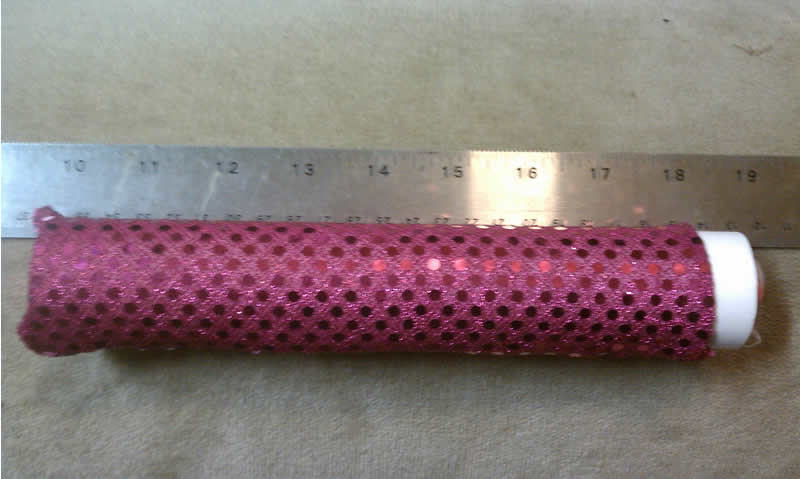 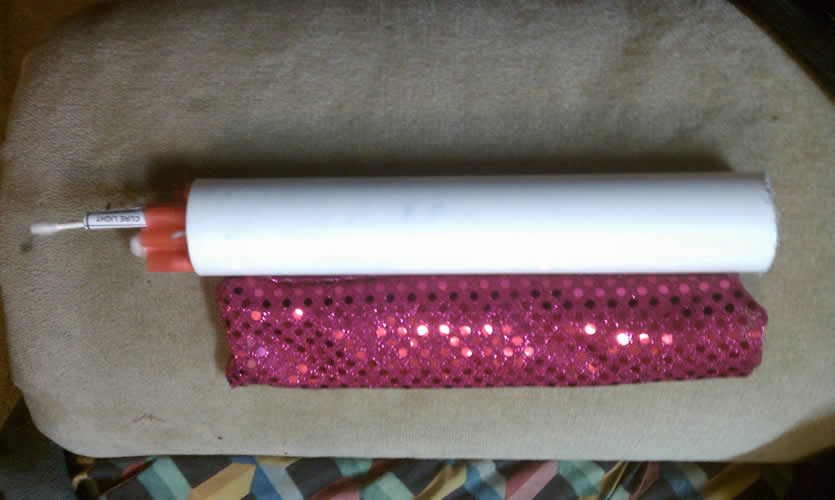 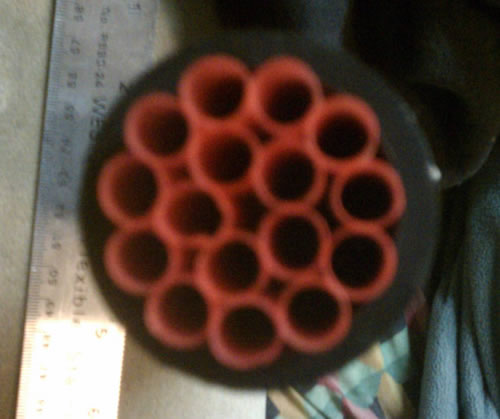 I then took the concept a step further and created the Artisan's Combat Rod. 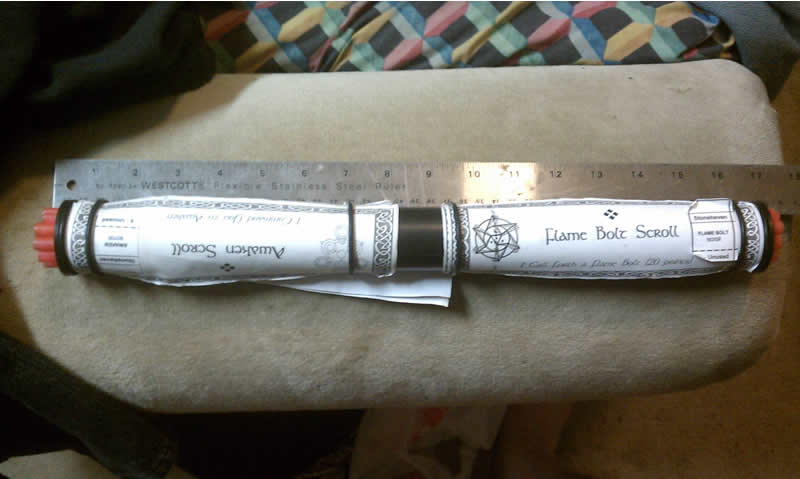 I found the longest sink drain pipe in the store and used that. It was more or less the perfect size with end lips on it to help with my ideas.


It has two sets of 16 straws, is roughly 18" overall and can hold 4 sets of scrolls on it. The scrolls are held on via some rubber gaskets I found (to keep the whole thing styling). The idea is that you touch the packet, cast the spell, tear off the scroll and repeat with the next one under it. My usual setup (as I often play the support character) is cure light damage potions in one end, Magic Armor potions in the other, and then Awaken, Release, Shield and Dragon's Breath scrolls attached - well an Artisan has to have SOME fun
Alliance Oregon
http://www.etsy.com/shop/larpgear - some of my production work for LARPs, including masks, armor and latex weapons.

This is beautiful. I just wanted to throw that out there.

Oregon Staff
Marshal
*laughs* As a master scrollcrafter, I've entered a few recent battles with scrolls tied to my arms for just this reason. I may now do this with my staff along the grip...
PC: Kelethuan Larenthin, Red Branch Tribe, Aer'Astra.
OOG: Ben Thayer
Oregon Head of Plot
Seattle/Oregon Rules Marshal

I try to keep it classy. I'm in the process of trying to construct something similar to this. A second weapon frog is coming first, but playing around with leather has turned out to be a fun side-skill that the hobby has made me pursue. 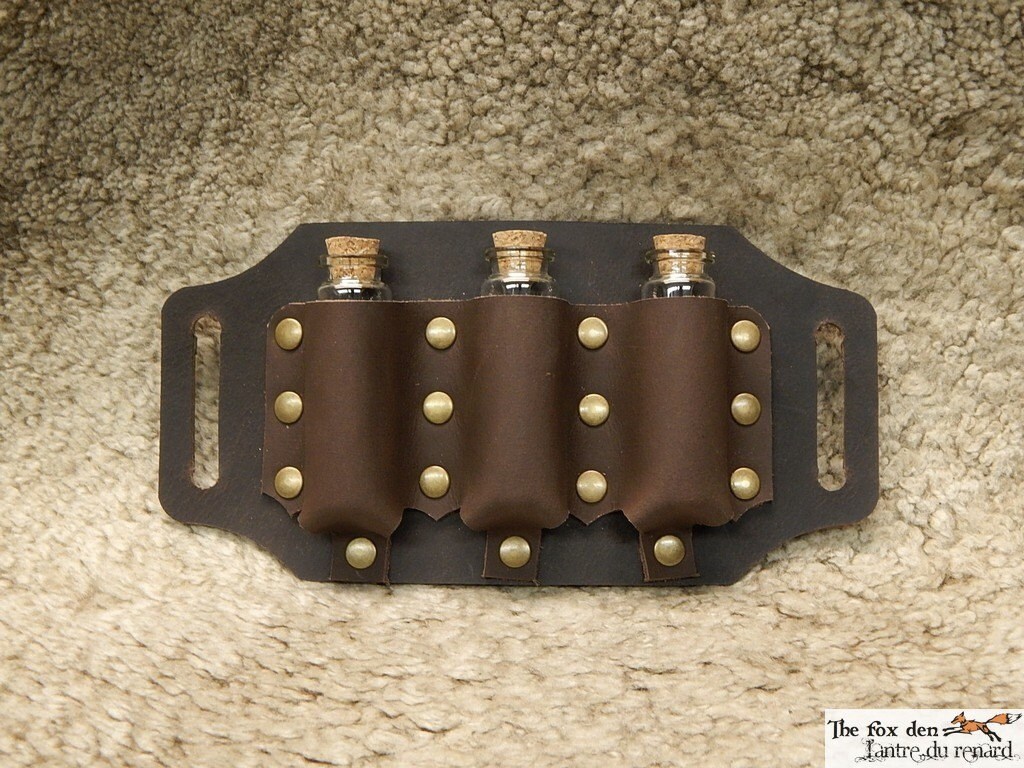 I generally recommend people not carry actual glass vials, having shattered a number of the polycarbonate ones by taking a hard fall on them.
IG: Nikolai, Soldier of Fortune
OOG : Chris K

For one of my characters I have two of the rifle round holders on my belt.

The other will be on my forearms under my bracers. I stretched a set over two large empty cans of hornet spray and applied some heat with a heat gun. Just enough to help then stretch out a bit.