Seattle Staff
Marshal
Based on the RAW, I would also interpret that it would be combinable with any damage swing, including Assassinates, Eviscerates, etc.

I would also assume that it could be combined with Doom Blow if you wanted the Doom carrier instead of Body (not likely in PVE, but definitely so in PVP).

I suspect it’s meant to be usable with “static” damage, however. Backstabs/Profs/Crits/Back attacks.
-Unless otherwise stated, all posts reflect my personal opinion, not the opinion of Seattle Alliance or its associated staff.

Ya, I guess the "single swing From Behind" is the part that is tripping me up. It matters not to me if it works with assassinates or doesn't. I just felt there was no real clear wording saying it didn't. Which is why when someone in my chapter said it didn't work, I was confused.

As far as being a "pro" . this is being a pro. Finding out how everything works, preparing for the worst. Shall I list the ways where this might come in handy, some personally happened!

resurrection
lasting effects suppress cave
spirtwalk backlash, all items destroyed
rifted out in the middle of the night, all items on bunk
sent to a plane that is half way between
suicide run, all items left on purpose
dragon magic game where you can not use magic items

Anyways I'm not trying to "power" game. I'm just trying to "Empower" my character. I have to fight alone, behind enemy lines a lot. sometimes one swing is all I get. Which why 500 doom, is very very tempting. But that is a lot of XP to waste for a really fun call. 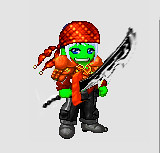 Owner
Oregon Staff
Marshal
I don't think there is a problem with "power gaming" (you really can't, Plot can always send out a crazier monster), some people like to build more efficiently for fighting than others, and that's okay. Some of us choose our races based entirely on their abilities, some for the RP. Some of us grab skills outside of our "class" for the RP, some for the efficiency. None of that is "good" or "bad", it just is. My first character's build was all over the place. He started as a Scout, swung Rogue and by the time he died he was a Fighter. He had Alchemy, legerdemain, thrown weapons... all kinds of "inefficient" build, but he was super fun to play. Even my new character has extra CO I don't "need" and things like "weapon master" because it fits with his backstory.

Seattle Staff
Marshal
I reject the notion that you can’t power game.

That kind of statement challenges my gaming pride, Rick.
-Unless otherwise stated, all posts reflect my personal opinion, not the opinion of Seattle Alliance or its associated staff.

Draven said:
I reject the notion that you can’t power game.

That kind of statement challenges my gaming pride, Rick.
Click to expand...

lol. read this at work, laughed, people looked at me funny.